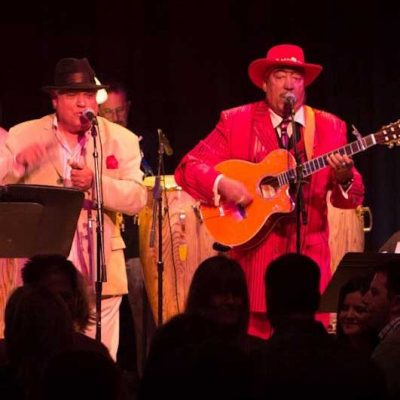 Heriberto “Tito” Gonzalez, “El Trecero mayor”, arrived in the San Francisco Bay area in the summer of 2000. His music is typical and primarily “El Son”, the music you know from the Buena Vista Social Club. “Tito” plays a Cuban instrument similar to the guitar, called the “Tres”. He studied with Tres master Papi Oviedo of the Buena Vista Social Club and then with the greatest guitarist in Cuba, Octavio Sanchez Cotán.

Tito, who first appeared on the Cuban music scene pushing forty and fully-formed, is still possessed of the creative impulse that drove him more quickly than most up a long and slippery ladder. Today, Tito’s original songs are deceptively simple – between their fluid melodies and retrograde rhythms, they evoke a focus and introspection that Tito attributes, in part, to his new life in America. On stage, Tito is the flawless showman, draped in suits and dignified fedoras in solid secondary colors. The quiet man comes to life with an energy that carries into the studio, where his smooth, mature voice, sometimes compared to that of classic son singer Daniel Santos in his later days, delivers love notes up and down the street with every slight inflection.