Honey B and the Pollinators in Concert 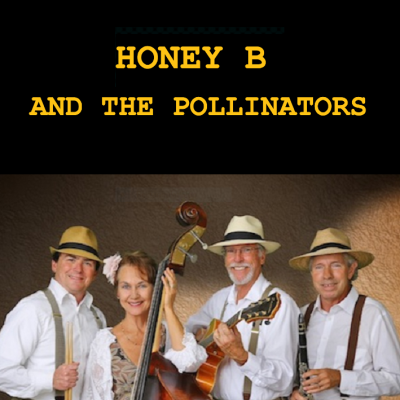 Good humor and great music!  For all ages.

Honey B and the Pollinators

CiCi Dawn (Honey B) has been in the Sonoma/Marin music scene since the early 70’s, singing and playing upright bass and guitar as a solo singer/songwriter and with The Bizarro Band, Nightfood, The Front Porch of Heaven, The Daydreamers Ball, All Gods Children, The Bloom Sisters, Girls Night Out, The Jingle Belles, Dusty Rhodes and Her Handsome Cowboys, The Fighting Instruments of Karma Marching Chamber Band/Orchestra and the Pollinators. She’s a little sassy and a whole lot of fun.

Guitarist Jesse Boggs was a founding member of Roy and The Adults, a Bay Area country/western swing band you may recall if you’re old enough. He also played with Natty Bumpo and the Bedford Set, which you may recall if you’re even older.  Jesse’s whimsical songs and recordings have been featured on numerous public radio programs. He has created two albums for children: “Daughters of Water, Sons of the Sea,” and “Multiplication Station.”

Drummer Bill Dorsey hails from New York City. He brings his eclectic musical interests to his percussive palette, mixing rock or world beats and Latin percussion when the mood calls for it. He’s played with Milestones, WannaBe Bop and Just Friends. Besides the Pollinators, Bill also currently holds the drum chair with Bittersweet Jam and Swingstreetin Sonoma County.

Bob Akers (sax, clarinet & flute) is a veteran Bay Area musician who’s been performing in the area for a good long while with many groups.