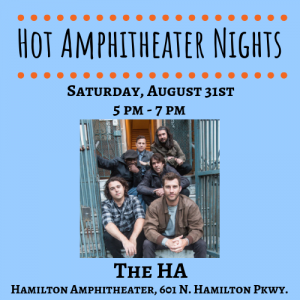 The HA, aka the Human Assembly, is a San Francisco based band that plays Beach Funk Americana; music that celebrates the human condition and the gathering of friends. Music to party to.

Since the summer of 2015, the band has hosted a number of ‘Party With Purpose’ events across CA to benefit local non-profits and organizations.

In the spring of 2016, The HA was selected for the inaugural artist residency program hosted by Project Amplifi and Smiley’s Schooner Saloon in Bolinas, CA. The residency focused on artist development and community leadership.

In the summer of 2017, the band released their first full length album, Worth the Hangover. In addition to performances at music venues across the greater part of CA and the Southwest, The HA has also played a number of larger events, like Bay to Breakers, Levi’s Stadium Pregame Show, Opening Day at Del Mar Racetrack, San Diego Fairgrounds and various other local festivals and events.

“They are a cool bunch of guys. Mostly originals, some covers… Interactive with the crowd. Could all play their instruments well. Lots of energy. They played straight through the three and a half hours… The girls liked them. They flashed the band a couple times. I like that in a band… Good party band.” – Matt L., Live nation