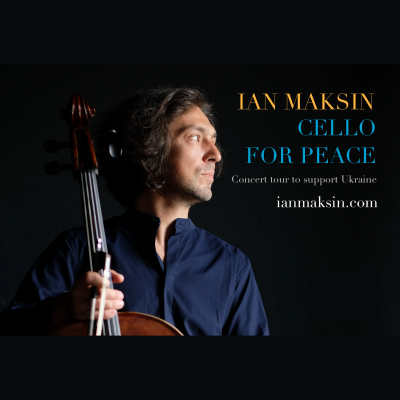 A Concert Tour to Support Ukraine

BREAKING BOUNDARIES both musical and geographical, cellist, composer, and multilingual vocalist IAN MAKSIN has created his own unique style by blending elements of different genres and traditional music from around the globe in a new way using his cello as the main unifying force.

Ian Maksin’s Cello for Peace | A Concert Tour to Support Ukraine presented by Every Blue Moon Concerts on the Inverness Ridge.

Trained at the Rimsky-Korsakov Conservatory and the Manhattan School of Music, Maksin has held positions as the principal of the New World Symphony under the direction of Michael Tilson Thomas and has been mentored by Mstislav Rostropovich, Yo-Yo Ma, and other renowned cellists.

In addition to being known as a classical artist, Maksin has collaborated with artists such as Andrea Bocelli, P. Diddy, Snoop Dog, Gloria Estefan, Sting, and Barry Gibb.

ONE-MAN ORCHESTRA: In addition to the cello, he used an electronic device called the loop pedal, which allows him to create “loops” or layers by recording and replaying his own playing in real-time.

SINGING IN 30 LANGUAGES: What began as a hobby and a passion for linguistics and travel has become part of a unique concert experience. At this time Ian Maksin sings in Ukrainian, Polish, Russian, English, Farsi, Armenian, French, Italian, Arabic, Hebrew, Mongolian, Bambara (one of the tongues spoken in West Africa), and many other exotic languages.

Most of this repertoire was amassed by Maksin during his world travels, jam sessions, and collaborations with local musicians. Many of his original songs and instrumental compositions are also infused with flavors of ethnic music from countries and regions where he drew inspiration from Mongolia, West Africa, the Middle East, the Balkans, Andalusian flamenco.

Tickets are $40 plus proof of COVID vaccination that includes at least one booster.  Outdoor concert.