Presented by Every Blue Moon Concerts at Residence of Camille LeBlanc, Inverness CA 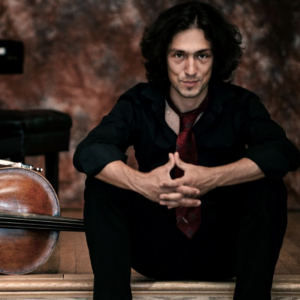 Breaking boundaries both musical and geographical, cellist, composer and multilingual vocalist Ian Maksin has created and developed his own unique genre by blending elements of different styles in a new way using his cello as the main unifying force.

He sings in nearly 20 languages.

Apart from being highly regarded as a classical artist, Maksin collaborates with other artists in a variety of music genres: jazz, blues, flamenco, rock, R7B, and world music, blending many styles together using the cello as the common denominator.

He can often be heard and seen in collaborative projects with artists from different corners of the globe including from Morocco, Cuba, Serbia, Iran, Pakistan, India, Spain, Mexico, and Japan.

Among the artists that he has performed and recorded with include Andrea Bocelli, P.Diddy, Snoop Dogg, Gloria Estefan and Barry Gibb. He has opened performances for Sting and his guitarist Dominic Miller.

Ian Maksin was born in St. Petersburg, Russia and started his cello studies at age six at the Special School for Gifted Children of the Rimsky-Korsakov Conservatory. At 17 he came to the United States to attend Manhattan School of Music later becoming the principal cellist of the New World Symphony under the direction of Michael Tilson Thomas. During that time his mentors included such artists as Lynn Harrell, Mstislav Rostropovich, Yo-Yo Ma, Bernard Greenhouse among others.