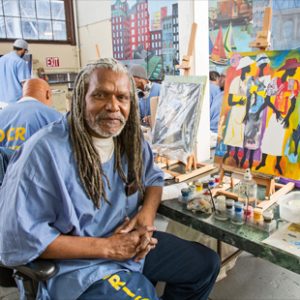 Showcasing original paintings, prints and sculptures by current and former San Quentin inmates in the Arts in Corrections program, plus works by corrections instructors and photographs of participating inmates by Peter Merts

Arts in Corrections is based on the belief that when institutionalized individuals participate in the arts their self-esteem and outlook on the world is significantly affected. Art workshops teach self-discipline, problem-solving, teamwork and concentration; the skills acquired through participation in the arts are translated to other aspects of one’s life. The Prison Arts Project, started in 1977, was the original model for Arts in Corrections, a statewide California prison arts program which helped lower recidivism (return-to-prison rates) and improve the quality of life for tens of thousands of incarcerated people, their families, and the larger community.

San Quentin Prison Arts Project was established through the original 1980-2010 Arts in Corrections program, which was part of the Department of Corrections. After the program ended due to statewide funding cuts, San Quentin’s program continued through the dedication of its teachers and the hard work and fundraising of Steve Emrick, former Artist/Facilitator at San Quentin, and Laurie Brooks, executive director of the William James Association. Its continued program helped to revive the current Arts in Corrections, now administered through the California Arts Council.