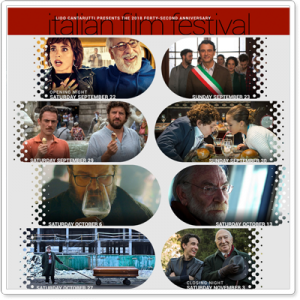 The Italian Film Festival presents its 2018 line-up of feature films at the Showcase Theater, Marin Center.

Eight films: fresh, recent comedies and dramas from Italy.  All films are in Italian/original language with subtitles in English, and are suggested for mature audiences.

Let Yourself Go — Saturday, September 22
An entertaining comedy, featuring the great Toni Servillo (“Viva la libertà”, “The Great Beauty”) that invites us to live our emotions without being inhibited by the opinions of others.

It’s the Law — Sunday, September 23
The popular comedians, Ficarra and Picone, star in a story about a mayoral election that responds to rampant civic rule bending and inefficiencies, with the election of a new mayor who promises order and legality.

It’s All About Karma — Saturday, September 29
A surprising comedy about friendship!

The Last Prosecco — Saturday, October 6
A thriller about relationships in the land of Prosecco, the effervescence of the bubbles, and the conflict between greed and respect for the land.

Easy — Saturday, October 27
An endearing road movie about Isidoro, or Easy, whose career driving go-karts has faltered, but who gets a new driving assignment: transporting a coffin to the Ukraine for burial!

Friends by Chance — Saturday, November 3
This highly praised film by director and screenwriter Francesco Bruni (“Inspector Montalbano”, “Human Capital”) traces the unlikely relationship between an elderly poet and a cocky young man, in a story told with grace and sensitivity.