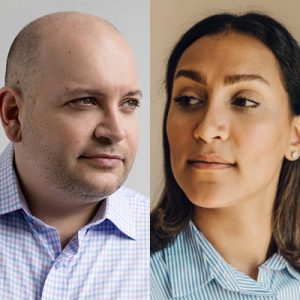 In Conversation with Don George

“Harrowing, & suspenseful…a deep dive into a complex & egregiously misunderstood country w/ two very different faces. There is no better time to know more about Iran—& Jason Rezaian has seen both of those faces.” -Anthony Bourdain

In Prisoner, Rezaian writes of his exhausting interrogations and farcical trial.

He also reflects on his idyllic childhood in Northern California and his bond with his Iranian father, a rug merchant; how his teacher Christopher Hitchens inspired him to pursue journalism; and his life-changing decision to move to Tehran, where his career took off and he met his wife.

Written with wit, humor, and grace, Prisoner brings to life a fascinating, maddening culture in all its complexity.

Jason Rezaian served as Tehran bureau chief for the Washington Post and is now an opinion writer for the paper and contributor to CNN. He was convicted—but never sentenced—of espionage in a closed-door trial in Iran in 2015.

Yeganeh Rezaian is a journalist who covered Iranian political, social and economic news from 2009 for Bloomberg News and The National until she and her husband, Jason Rezaian, were detained by Iranian authorities in 2014. She currently works as a full-time member of the advocacy staff for the Committee to Protect Journalists.

Don George is the author of The Way of Wanderlust: The Best Travel Writing of Don George and of Lonely Planet’s Guide to Travel Writing and the editor of ten anthologies, including A Moveable Feast, The Kindness of Strangers, Better Than Fiction, and An Innocent Abroad. George is Editor at Large for National Geographic Traveler, where he writes feature articles and the monthly Trip Lit column. He is also Editor of BBC Travel’s literary travel column, Chance Encounters.