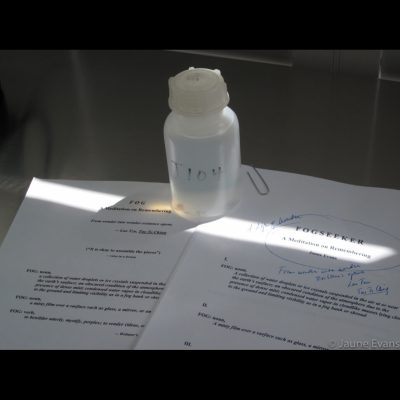 “Collecting Fog” opened for the first time as an exhibition at the Presidio’s Thoreau Center in November 2011.

It was an artistic experiment—a collage of photographs, writings, inspiring quotes, and instructive dreams—honoring a man who pursued his passion for collecting fog in a quiet and steady way. In 2013, it traveled to the Grand Manan Museum to be shared and celebrated with the local Grand Manan Island community.

The images and words reflected some of the magic and mystery in this creative life of intertwining spiritual friendships. The collage format continues to offer itself as a medium which invites experimentation, ongoing meditation and dialogue, ‘the self settling on the Self.’

During the last 11 years, the outward-facing expression of the exhibition “remained quiet for awhile,” as the artist moved into a new home, new work, and a new opportunity to study and practice Zen in the Bay Area. It began to stir again during the pandemic, asking for recollection, a ceremonial closing.

Inspired by “In Gratitude,” Katharine Kunst’s fantastic 2021 gift-giving exhibition at Commonweal, “Collecting Fog” will open for the last time on September 12, 2022, as an organizational fundraiser.

It is given with thanks for Commonweal’s ongoing creativity, its healing programs and community service—especially for all the kindness and loving relationships generated by staff, volunteers, and the vast network of friends.

Recollecting Fog is a continuing meditation and dialogue of wonder, a creative exploration into new territory.

Download a map with driving instructions from San Francisco, San Rafael, or the East Bay
Download a map from Santa Rosa, Petaluma, and Vallejo

CONNECT WITH Gallery at Commonweal