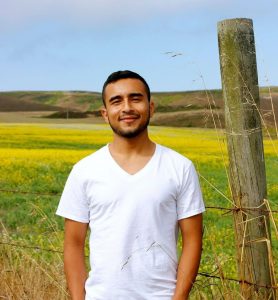 Join us as Javier Zamora reads his poetry

It’s the day after the mid-term election and, one way or another, don’t you agree that we are going to need some poetry?

Javier Zamora was born in La Herradura, El Salvador, in 1990.

Javier’s father fled El Salvador when he was a year old, and his mother fled when he was about to turn five. Both parents’ migrations were caused by the US-funded Salvadoran Civil War.

At the age of nine, Javier traveled unaccompanied 4,000 miles from El Salvador to the United States to be reunited with his parents. He migrated through Guatemala, Mexico, and eventually the Sonoran Desert; before a coyote abandoned his group in Oaxaca, Javier managed to make it to Arizona with the aid of other migrants.

Unaccompanied, published in 2017, explores how immigration and civil war have impacted his family.

He holds a BA from UC Berkeley, where he studied and taught in June Jordan’s Poetry for the People program. Zamora earned an MFA from NYU and is currently a Wallace Stegner Fellow at Stanford University.

In 2016, Barnes & Noble granted him the Writer for Writers Award for his work with the Undocupoets Campaign. He is also a member of the Our Parents’ Bones Campaign, whose goal is to bring justice to the families of the ten thousand disappeared during El Salvador’s civil war.

CONNECT WITH College of Marin Library