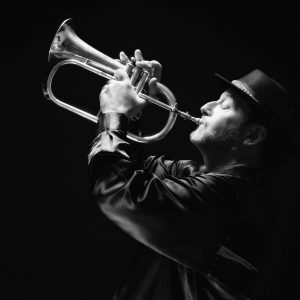 His boundary bursting, accolade filled career reached a dynamic peak in 2017-18 as a member of FLOW, a dynamic ensemble (featuring genre greats Fiona Joy, Lawrence Blatt and legendary Windham Hill founder and guitarist Will Ackerman) whose self-titled collection hit the Top 5 on the Billboard New Age Albums chart and won Album of the Year at the ZMR Awards and Best New Age album at the Independent Music Awards. For the inventive trumpeter and flugelhornist, there was only one way to follow up on this success – Reach!

For Oster and his chief collaborator/album producer Ruslan Sirota (who also plays piano, keyboards, guitar and provides vocals), the title Reach doubles as a powerful mission statement. It means breaking from Oster’s past tried and true studio approach of the past and engaging in a deeper exploration of the horn player’s artistry. Over the course of nine tracks, the result is a transcendent chill/ambient/new age meets sensual and grooving jazz/world fusion vibe where truly and radically, there are no creative boundaries.