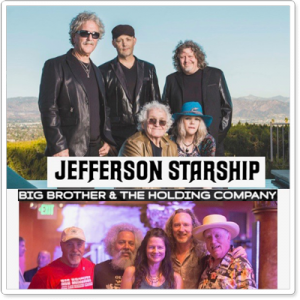 JEFFERSON STARSHIP and Big Brother & The Holding Co are excited to be a part of the “Women in Music” series at Marin Center.

Thus far, 100% of bands booked by Friends Productions have had female lead singers.

JEFFERSON STARSHIP rose from the ashes of another legendary San Francisco band, Rock and Roll Hall of Fame inductees, Jefferson Airplane. They are known for “Somebody to Love”, “White Rabbit”, “Volunteers”, “Count on Me”, “With Your Love”, “Miracles”, and countless other hits.

The band features original and historic members David Freiberg (also a founder of San Francisco luminaries Quicksilver Messenger Service) and drummer Danny Baldwin, along with longtime members Chris Smith on keyboards and synth bass, Jude Gold on lead guitar and GRAMMY Nominee Cathy Richardson anchoring the female vocal spot made famous by the inimitable Grace Slick (who invited her to sing in her place as Jefferson Airplane accepts their Lifetime Achievement Award at the GRAMMY Merit Awards concert).

Big Brother & The Holding Company, Janis Joplin’s Original band, are considered, along with Jefferson Airplane, the pioneers of the San Francisco Sound. They are the band that recorded “Cheap Thrills” which has been voted by Rolling Stone as one of the greatest classic rock albums of all time, is in the GRAMMY Hall of Fame, and the Library of Congress.

Original members Peter Albin, bass and Dave Getz, drums continue to bring the music they created with Janis Joplin to audiences all over the world. Darby Gould, formerly with Jefferson Starship, will be singing the great Janis/ Big Brother classics “Ball and Chain”, “Piece of My Heart”, “Down on Me”, and “Summertime”. They are joined by Tom Finch and David Aguilar on guitars plus Kate Thompson on violin and keyboards.