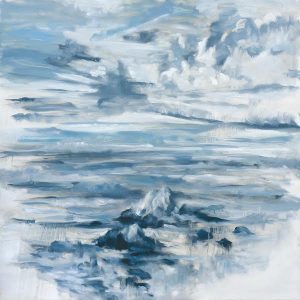 Jeffrey Nemeroff Artist Statement:  In the expressionistic paintings of North Coast, I depict areas of the Northern California coastline at various degrees of abstraction. Using photographs for reference, this series reflects a memory or feeling rather than a literal representation of the place itself—a moment when water, earth and sky will never be the same again. I’ve always been drawn to the ocean, and capturing its power and vastness—as well as its vulnerability—is what drives this series. Applying a limited color palette I first developed at a residency in Northern Norway I disassociate the work from reality, further emphasizing that the experience is but a fading memory, as impermanent as the oceans themselves.

Born in Chicago, Jeffrey Nemeroff was raised near Los Angeles where he began studying art at an early age. After obtaining a BFA in art and design, he continued an education in painting at Otis College of Art & Design and began exhibiting his work. Over the past twenty-five years, Nemeroff’s work has been included in group and solo exhibitions in the United States and Asia, and can be found in collections throughout the United States, Europe, Britain, Russia and the Middle East. He currently lives and works in Sutro Heights, San Francisco.

Patricia Leeds – Talking to Myself

Patricia Leeds is a mixed media artist. Her mediums of choice are encaustic, oil paint, and photography. She combines her photographs with these other mediums creating a dream like quality.

“I have been an artist since I was a little girl, drawing outside the lines. I break rules, I experiment. I create my art to reflect what I experience in the world. My work represents my internal life.”

Patricia Leeds has a background in commercial photography and is a self- taught artist. She has a studio in Novato at Hamilton Field and teaches digital painting classes. 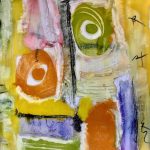