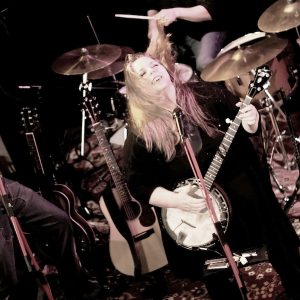 Together with her band of road-tested rogues, she delivers a seasoned yet spirited sound with forays into swamp rock, straight-up soul, backwater honky tonk, and old-time blues and finely-hewn ballads.

Jenny’s producer and longtime guitar player, Phil “Philbillie” Milner, was guitar tech for Bob Weir & Ratdog and traded licks with the likes of Hot Tuna, Los Lobos, Bruce Hornsby’s band and The Black Crows in many a backstage and hotel room jam and also worked for Tracy Chapman, Bonnie Raitt, Primus, Graham Nash, and a few other cool players.

Kerr has toured Europe seven times and has become a regular favorite on the country/blues/roots circuit. She’s headlined festivals the world over, including Germany, France, Spain, Norway, Denmark, Holland, Belgium, Switzerland, Austria and Mexico—most recently at the Zihuatanejo International Guitar Festival’s 10th Anniversary, where has she performed 6 out of 10 years.