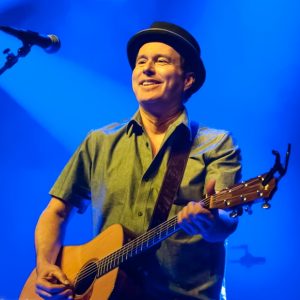 **POSTPONED** due to public health advisory

Sean passed away in 2013 and is remembered in the 2017 film ‘Mad Hannans‘ directed by Martin Shore.

A distinguished songwriter and entertainer, Jerry Hannan recorded his own song, “Society” with Pearl Jam’s Eddie Vedder, which is featured in Sean Penn’s film Into the Wild.  “I Thought I Was You”, written by Jerry and brother Sean Hannan also plays in Into the Wild.

Described as “shades of Dylan and John Prine …very Americana with a faint Irish lilt”, Hannan’s songs (like those of Springsteen, Steve Earle and Cat Stevens) speak of our everyday lives and the magic that we sometimes miss. He’s a storyteller, known for his thought provoking lyrics and exuberant performances.  He has been called a Marin County treasure, often funny, sardonic in a good-natured way, highlighting issues like ecology, friendship, and love.

Raised on jigs and ballads in San Francisco’s Irish community, Jerry Hannan grew up listening to the music of his Irish-born parents (The Dubliners, The Clancy Brothers), as well as Cat Stevens. As a youngster he took accordion lessons, switching to guitar in high school and playing in rock ‘n roll bands.

**POSTPONED** due to public health advisory