Joel Selvin: Altamont and the End of the 1960s? 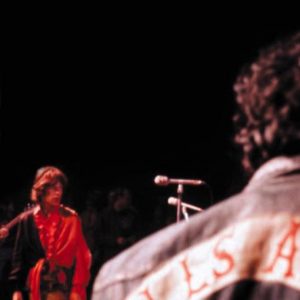 Fascinating, timely discussion on a topic/time that has shaped the Bay Area’s consciousness

As 2019 draws to the close, the media tributes, commemorations, remembrances and explorations related to the 50th anniversary of the 1960s comes to an end.

This special program will focus on the 50th anniversary of the Altamont Speedway Free Festival, the traumatic and deadly Rolling Stones concert in the East Bay of San Francisco that is often presented as the symbolic end of the 1960s counterculture. But was it? What is the legacy of Altamont?

At the notorious December 6, 1969 concert—held several months after Woodstock took place across the country—one fan was knifed to death, three died in accidents, and many more were beaten and abused before a crowd of well over 300,000.

Legendary Bay Area music writer Joel Selvin has written the definitive history of that day. His book Altamont: The Rolling Stones, the Hells Angels, and the Inside Story of Rock’s Darkest Day explores in-depth that dark day, what led to the mayhem and what that concert means half a century later.

Nearly 50 years to the exact day of the Altamont concert, Selvin will sit down with photographer and music journalist Tabitha Soren for a discussion of Altamont and the final event of the 1960s that continues to divide and fascinate the public.

Did the counterculture, formed in the Bay Area, end in the chaos of the Altamont concert? Is the mayhem associated with the concert the proper way to remember the 1960s ending? Why was the concert such a disaster and what responsibility did the Rolling Stones, Grateful Dead and others have? Why are we still talking about it?

Please join us for a fascinating and timely discussion on a topic and time period that continues to shape the Bay Area’s consciousness. The event will be held in Mill Valley, the Marin County town that held the very first rock festival on Mount Tamalpais in June 1967.

Wine and beer available
All ticket sales are final and nonrefundable