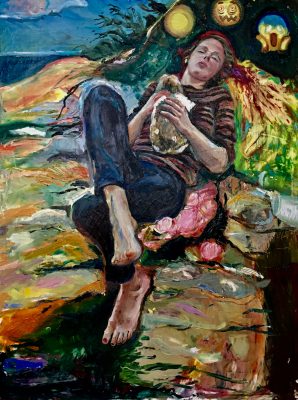 Bay Area artist Joelle Provost is pleased to present her first solo Bay Area exhibit of paintings, Art of our Modern Landscape. On view will be ten new oil paintings, ranging in sizes from 48”by 48” to 70”by 60”, created through the artist’s vision of how 19th century painters would view the world’s current environmental issues. Provost is a professional painter who has an affinity towards 19th century painters such as Gustave Courbet, Arnold Bocklin, Paul Cezanne, and Vincent Van Gogh.  She is also a nature enthusiast. Through observing her surroundings, both urban and green, Provost began to question what artists from previous centuries would think of the world’s current landscapes, full of trash and other man made pollutants that have affected the earth’s environment and animal species. Would Monet choose to include the soda can floating by Lily pads in a given body of water? Would he feel motivated to create images of nature, despite human’s overwhelming impact on it?

For Art of our Modern Landscape, Provost has created a body of work that honors these painters with her vision of what they would think of the earth’s current environmental predicament. If transported to our time, what they would choose to depict?

“When closely examining my environment, I often ask what I can do as an artist to address the impacts of the way we live in the company of the natural world in the age of climate change. This show is my contribution, the first of many, to inspire reverence for the world we live in, and action to move forward as stewards of our natural world.

Twenty-five percent of the proceeds from art sales will go to forest and wildlife preservation through Wildlife Alliance. Their mission is to combat deforestation, wildlife extinction, climate change, and poverty be partnering with local communities and governments.

Art of our Modern Landscape will show for one-night only and is FREE and open to the public. Refreshments and lights snacks will be served. Each painting on display will be available for purchase. 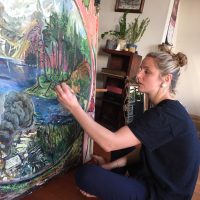 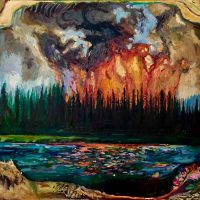 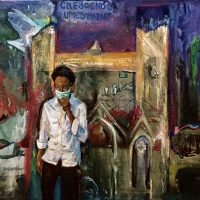