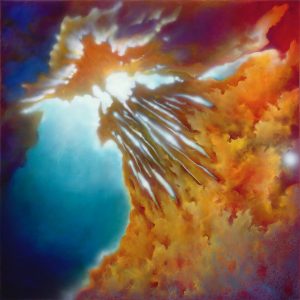 George Lawson is pleased to present our second solo show of Johanna Baruch, new paintings from her Cosmos Series.

The title of the show, Himma, is a word Baruch discovered that comes from Sufi teachings and means the core of the heart where imagination and rebirth reside, in essence the power of the heart. It is associated with meditation, conception, and imagination, the drive of the soul’s desire in intense spiritual resolve.  Essentially it is the pure, active force in human beings found in the origin of creativity.

For years, Baruch has been working on enamel-surfaced oils inspired by images of the deep reaches of outer space, stylized renderings of star clusters, novae, floating giants and celestial dust. Her studio practice is catalyzed from groundbreaking photographic sources, images from NASA’s Hubble space telescope.

Although she renders these works with painstaking, traditional easel-painting techniques—sable brushes, glazing and so on—they appear at first glance to be pooled, splashed and dripped, essentially process-derived paintings.

The study of the heavens seems apt subject matter, infinite reach being an inspirational motif, and Baruch approaches deep space with a generous license to interpret, even though her initial source comes from photographs.

Johanna Baruch was a Djerassi Past Trustee from 2004-2009 and exhibits her paintings regularly. In the past year alone, she has had solo installations at Scope NY, ArtMarket SF, and George Lawson Gallery, participated in group shows at George Lawson and David Zwirner, as well as joining in community presentations at MarinMOCA.