John Seaver: A Retrospective / Elizabeth Leger: The Chicken or the Egg 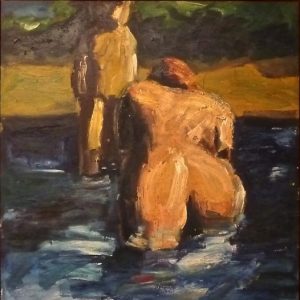 Art exhibits for the month of January

John moved to North Beach during the 50’s and attended the San Francisco Art Institute.  During this time, he was friends with the poet Philip Whalen and painter Bruce McGaw.

He knew the photographer Imogen Cunningham and various artists who were part of the Bay Area Figurative Movement.  John lived for over four decades in Sausalito where he had a working studio.  He moved to a retirement community in San Francisco in 2010.

He studied under Richard Diebenkorn who greatly influenced his style of painting and drawing as an artist.   In his artwork, John tried to be honest and attempted to paint “paintings” rather than “pictures.”   His styles included Bay Area abstract expressionism, figurative art, and non-objectivism.

Elizabeth Leger: The Chicken or the Egg

Elizabeth Leger’s work has been exhibited throughout the United States and is included in the collection of  the Achenbach Foundation of the Legion of Honor Museum, SF.  She is a recipient of the Wallace Alexander Gerbode Foundation Museum purchase award.  Liz teaches at California College of the Arts and City College of San Francisco.

Knowledge
I’ve stitched my dress with continents,
bound the equator round my waist.
I waltz to a steady rhythm, bending slightly.
I can’t stop my arms
plunging into galaxies,
gloved to elbows in adhesive gold:
I carry on my arms a star’s vaccine.
With such greedy sight
my eyelids flutter in the breeze
like a strange enthusiastic plant.
No one fears me
except Error,
who is everywhere.
— Nina Cassian (translated from Rumanian by Michael Impey & Brian Swann)