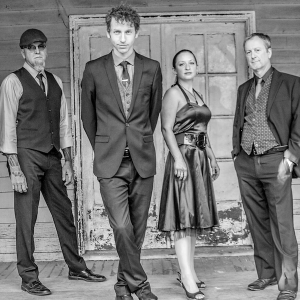 A galvanizing force on the Bay Area indie rock scene since launching serendipitously in 2013, Junk Parlor is that crazy-rare band whose vibe is so driven by joyful schizophrenia that it transcends easy genre trappings.

Born from the wild musical wanderings of Jason Vanderford, renowned for his five years recording and touring with gypsy jazz sensation The Hot Club of San Francisco, their energizing musical collage includes 50’s rock and roll rumbling atop gypsy rhythms, a bit of Gipsy Rhumba, tango, Eastern Euro/Hungarian music, bellydance, punk…Vanderford was raised on “rock and roll and punk and everything under the sun,” so other sounds are certain to appear as the gypsy junk rockers continue their jam.

The songs on their mostly vocal 2013 debut Wild Tones and predominantly instrumental follow-up Melusina have earned them comparisons to Nick Cave, Leonard Cohen, Gogol Bordello, Dead Kennedys and Tom Waits. One fan called it “Crooner Punk” because of Vanderford’s beckoning, low range vocals – but those are just the centerpiece of a vibe that includes the singer’s acoustic banjo and rhythm guitar, the polyrhythmic grooves of drummer, cajon player and group cofounder RT Goodrich, Laela Peterson-Stolen’s soaring violin and viola and the growling electric fretless bass of Tim Bush.