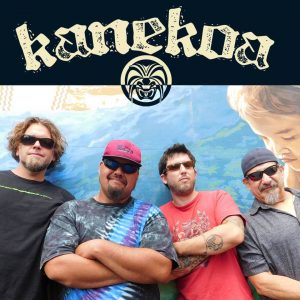 Kanekoa has been playing together since 1999, melding elements of Hawaiian, Rock, Folk, Blues, Reggae and improvisation into a truly unique sound.

Bill Kreutzman, drummer for the Grateful Dead and the 7 Walkers, called Kanekoa “The Hawaiian Grateful Dead.” Kanekoa was invited to play Bill’s wedding on Kaua’i.

Mick Fleetwood (Fleetwood Mac) said of Kanekoa: “The band is amazing, and Vince is amazing,” says Fleetwood, who also plays uke and travels with one when he’s on tour. “I saw him playing electric guitar years ago on Maui, and it was pretty stunning. He’s now uniquely applying all his influences, stepping out of the traditional ukulele approach. He’s great.”

James “Hutch” Hutchinson, bassist for Bonnie Raitt, says of Kanekoa: “Kanekoa takes the ukulele and uke-related music to another place.” “Vince has a much different and funkier pocket than any other uke player I’ve heard or have played with.”