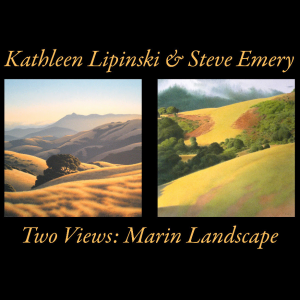 Joint exhibition: landscape paintings and prints from the natural beauty of Marin

Kathleen Lipinski & Steve Emery installed a total of 42 pieces in this spacious lobby!

It’s great to see so much our work combined in one well-lit, high-ceiling room.  All that, plus a great view of the San Francisco Bay!

Steve Emery grew up in Marin County and has worked and shown throughout Marin since 1979.  He runs, coaches cross country @ Sir Francis Drake High School, and much of the imagery in his work comes from his runs through the water district, Tamalpais, Pt. Reyes, Bald Hill, Deer Park regions of Open Space.

Kathleen Lipinski also has also shown throughout Marin since 1979. She was a printmaker for 20 years, with Steve assisting, printing editions of Kathleen’s detailed serigraphs.  They printed as many as 36 stencils, before moving more into painting.  Kathleen now produces limited edition large format digital prints of some of her paintings, but now, primarily a painter.  She has done large commission pieces, including an 8′ x 14′ canvas for the lobby of a building in Salt Lake City, UT.

Currently, they both show @ Marin/Scapes, the Marin County Fair, and do 2 Open Studios a year.  Kathleen shows in the Sausalito Art Festival.  They both enjoy being outdoors, but painting in separate studios.  Steve works from local imagery as well as the Sierra.  Another body of work reflects more musical, lyrical, graphic qualities with movement. 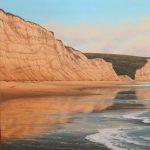 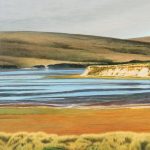 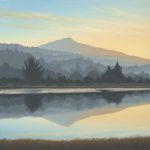 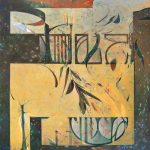