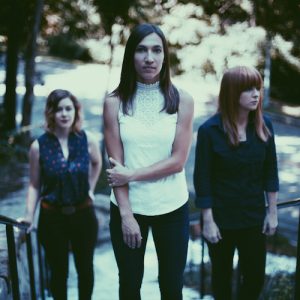 Katy Guillen & the Girls have amassed a following across the country for their vivacious brand of roots rock.

In addition to being one of Kansas City’s most distinguished acts, they have performed at such high-profile events as the Montreal International Jazz Festival and the King Biscuit Blues Festival, and opened for major acts like The Doobie Brothers and Robin Trower.

A seasoned guitarist who picked up her first guitar at age 8 and began participating in blues jams around Kansas City at 14, Katy Guillen established the trio in 2012, when she was offered a support slot for blues supergroup Royal Southern Brotherhood. Being without a backing band, she enlisted the talents of Claire Adams and Stephanie Williams, forming an immediate chemistry that would push her songs to new heights.

Williams brings a distinctively melodic voice to the drum kit, compelled by rock influences like Band of Skulls and Sleater-Kinney, and background in jazz ensembles. With Adams’ instincts as a multi-instrumentalist and composer, her impeccable bass lines and backing vocals are an ideal complement to Guillen’s commanding guitar licks and earnest lyrical delivery.