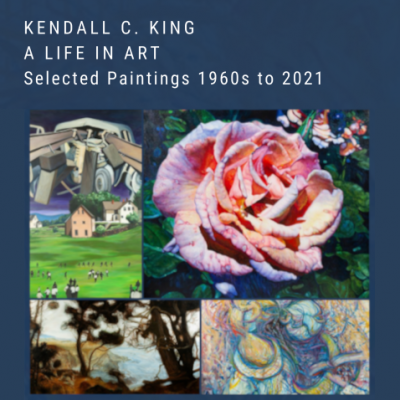 Kendall C. King (dec. 2021) obtained an MFA from San Francisco Art Institute in 1970. Ken taught art classes at The California College of Arts and Crafts in Oakland from 1970-74 and at the College of Marin from 1974-91, when he retired from teaching.

Over his lifetime Ken produced hundreds of paintings and drawings. He explored surrealism, manipulating computer images and painting from projections of the images. He did a series based on his dreams, and later explored photorealism, painting seascapes, roses and relatives. Ken was technically oriented as well as creative, making his own paint brushes out of foam, which he shaped to produce special strokes on canvas.

Ken showed his paintings in galleries in San Francisco and at Marin Society of Artists, where he received many awards, including a Grumbacher Award. At Marin County Fairs his work was awarded, including Best in Class – Fine Arts and Crafts and Distinguished Art Award – for all Fine Arts and Crafts. Ken also contributed to the community through his involvement with the Marin Society of Artists, where he was President from 1984-85.

Guests may park on the right hand side of the driveway and may also use adjacent City of San Rafael parking lots with consideration to hourly limits on certain days of the week. Saturdays and Sundays are free of most parking restrictions in these lots.