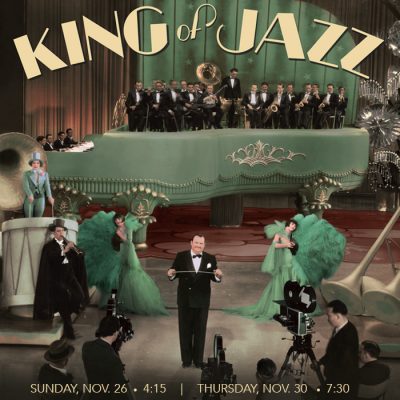 This 1930 Universal musical, released in early Technicolor, has been painstakingly restored by the studio and offers what jazz critic Gary Giddins calls “a Rosetta stone of early American pop.”

The “King” is Paul Whiteman, one of the most popular entertainers of the 1920s and the bandleader whose signature piece was Gershwin’s “Rhapsody in Blue,” a highlight of the film.

While it unfortunately reflects its era in underplaying the African-American origins of jazz in favor of an amalgam of European influences, the film impresses as pure spectacle.

Musical, comedy and novelty acts include the first Technicolor animation, the first screen appearance of Bing Crosby (as a member of the Rhythm Boys) and the top-hatted Russell Markert dancers (now known as the Rockettes).