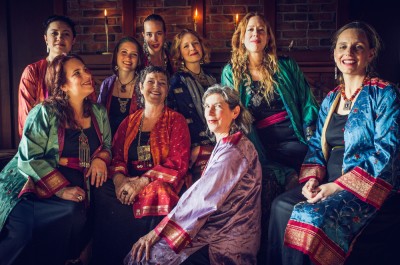 Kitka’s Winter Songs offers a unique holiday celebration with beautiful harmonies and songs of Winter from various Eastern European cultures. “Simply amazing harmonies…truly this is the most wonderful singing I have ever heard.”—David Crosby,

WinterSongs is Kitka’s critically-acclaimed and wildly popular winter holiday program showcasing seasonal music from a wide variety of Eastern European ethnic and spiritual traditions. For countless centuries, people around the world have utilized the power or community singing to infuse warmth, cheer, spirituality, wishes for peace, health, and good fortune into the long, dark, cold and difficult winter season. Eastern Europe’s geographic position as a crossroads between Europe and the Orient has produced an astonishingly rich and varied array of seasonal musical rituals.

Kitka’s program features songs ranging from rousing Slavic folk carols; to lush meditative Eastern Orthodox sacred choral works; to Baltic pagan incantations for the return of the Sun Goddess, to Caucasus Georgian Alilos (hallelujahs); to Yiddish, Sephardic, and Hebrew songs for Chanukah; to Bosnian-Muslim ilahijas (devotional hymns); to rhythmic Balkan Romany (“Gypsy”) tunes for the winter festivals of Vasilica and Kurban Bajram. Traditional pieces will be woven together with new folk song arrangements and original compositions by Kitka members and contemporary American and Eastern European composers, all inspired by the customs, beauty, and mystery of wintertime.

What to Expect: A winterfest of vocal harmonies from Eastern European ethnic and spiritual traditions.
Reserved Table seating and general admission single seats available
Concessions include beer/wine /snacks & fresh baked goods – Concessions allowed in theater
Parking: Typically plenty of space, but give yourself time for parking
“A stunning group unlike any other…absolutely electrifying!” —Garrison Keillor, A PRAIRIE HOME COMPANION

“A brilliant musical program…all of it performed with accuracy and flair” —Don Heckman, LOS ANGELES TIMES