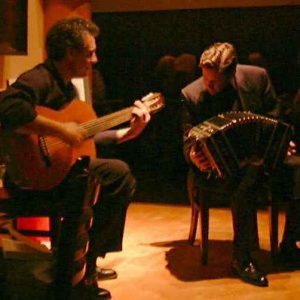 Seth Asarnow on bandoneón and Marcelo Puig on both vocals and guitar, share their tango repertoire every Wednesday night at the Seahorse.

These two are incredibly talented musicians and between the two of them they permeate the cozy supper club with very danceable Tangos, Vals and Milongas.

When the duo take a break, a rotating guest DJ fills in so that everyone can continue dancing.

Marcelo Puig was born and raised in Buenos Aires, Argentina. He began studying classical guitar at age ten.  He draws from a wide range of popular musical influences such as Latin, American Folk, Brazilian, Rock, Blues, Jazz and Tango. Marcelo is also an accomplished singer with a repertoire of Latin, Folk, Milonga and classic Tangos.  Marcelo plays alongside many tango musicians, dancers and choreographers in the Bay Area.

Seth Asarnow, a native of the Bay Area, has a repertory consisting of hundreds of tangos. He can be heard on recordings that range in style from traditional tango to pop. Seth has both composed film scores and played on film soundtracks, and he works regularly with some of the finest tango dancers in the world. He also directs and performs often with his Sexteto Tipico. Seth continues to promote the tango locally, teaching bandoneón and playing both public and private engagements.