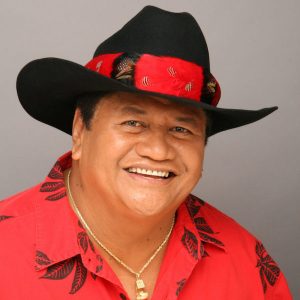 A master of the slack key guitar, Led Kaapana has been one of Hawaii’s most influential musicians for four decades.

His mastery of stringed instruments, his exceptional picking style on slack key guitar and ‘ukulele, and his extraordinary vocal range — baritone to leo ki`eki`e (falsetto), have made him a musical legend. With easy-going style and kolohe (rascal) charm, he has built a loyal corps of “Led Heads” from Brussels to his birthplace on the Big Island of Hawai‘i. His newest CD features Led’s favorites on ‘ukulele.

Recognition by his peers earned Led Kaapana four Grammy nominations in his own right and three wins on slack key compilations.  He has won multiple Nā Hōkū Hanohano (Hawai‘i’s “Grammy”) awards, including Favorite Entertainer of the Year in 2009, and most recently in 2017, Best ‘Ukulele Album for Led’s all- ‘ukulele CD Jus’ Press vol. 2.  In 2011, he was honored with an NEA National Heritage Fellowship for his artistic excellence and his contributions to our nation’s traditional arts heritage, and has been invited to perform at the Library of Congress in celebration of 35 years of these Fellowships.

Kaapana has worked with Nashville musicians Dolly Parton and Chet Atkins (whom he cites as an early influence) and collaborated with Alison Krauss, Jerry Douglas, and other bluegrass musicians for Waltz of the Wind.  In addition, Kaapana has recorded with numerous renowned Hawai‘i musicians, including NEA National Heritage Fellows Aunty Genoa Keawe, the Ho’opi’i Brothers, and Barney Isaacs.