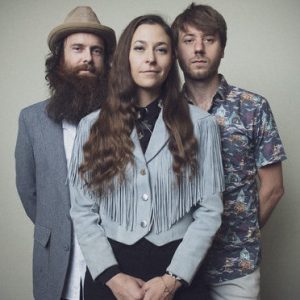 Born the daughter of a coal miner in middle Missouri, Lindsay Lou’s family moved to Michigan shortly after Lindsay was born.

She describes her family as close knit and musical, their lives influenced heavily by her maternal grandmother’s radical ideals and zest for life.

In fact, if you ask Lindsay, her grandmother—a woman who was once put in jail during the Civil Rights Movement for teaching a lesson on the “f” word as a high school literature teacher—is one of her greatest influences to this day. Armed with her activist spirit, Lou’s grandmother set up a Christian commune in Michigan’s Upper Peninsula for her growing family of twelve, as well as some stragglers.

There in a big farmhouse, Lou’s dad was their neighbor.

Her singing floats over the masterful playing and deep groove of her band with both a fierce intensity and a tender intimacy.