Presented by Oakland Public Conservatory of Music at Streaming Arts 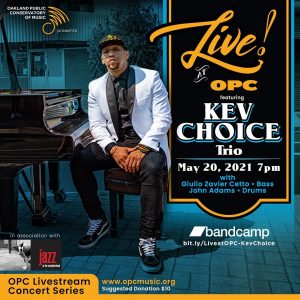 Live! at OPC – an evening of the artistry of Oakland native son, Kev Choice

Blessed with prodigious talent, plus the skill and dedication to his craft to pull it off, the Oakland-based artist is redefining what it means to be a musician in this day and age.

Not too many classically-trained pianists who hold Master’s degrees in jazz can rock microphones with blazing-hot 16s.

Yet such versatility comes natural to Choice, whose diverse array of influences ranges from Prince to Rakim to A Tribe Called Quest to Stevie Wonder to McCoy Tyner to Chopin and Ravel.

As an emcee, Choice has superb flows, and consistently conscious, intelligent subject matter– reminiscent of a West Coast version of Talib Kweli or Nas. It’s tempting to sleep on his vocal abilities, given his musical excellence – until you’ve seen him freestyle on stage.