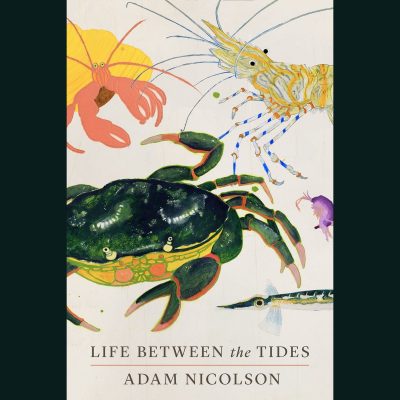 Adam Nicolson joins us from the UK for a conversation about his latest book, Life Between the Tides (FSG). Adam will be in conversation with Nathaniel Rich.

“Nicolson is the supreme poet of the edges—which is where the only interesting and significant things happen. And in Life Between the Tides—a book explicitly about the liminal places where everything is change—his talents are supremely on display. The shore confounds the whole notion of boundaries, and it takes a writer who himself despises and transgresses the traditional boundaries of ‘science’, ‘philosophy’, and ‘art’ to do justice to the shore. Nicolson brings all of himself to the foaming edge of the sea. No one else I know would have the nerve to do that. The result is a subversive, disconcerting triumph; a wondering, wonderful thing.” —Charles Foster, author of Being a Beast and Being a Human

In Life Between the Tides, Adam Nicolson investigates one of the most revelatory habitats on earth. Under his microscope, we see a prawn’s head become a medieval helmet and a group of “winkles” transform a Dickensian social scene, with mollusks munching on Stilton and glancing at their pocket watches.

Or, rather, is a winkle more like Achilles, an ancient hero, throwing himself toward death for the sake of glory? For Nicolson, who writes “with scientific rigor and a poet’s sense of wonder” (The American Scholar), the world of the rockpools is infinite and as intricate as our own.

As Nicolson journeys between the tides, both in the pools he builds along the coast of Scotland and through the timeline of scientific discovery, he is accompanied by great thinkers—no one can escape the pull of the sea.

We meet Virginia Woolf and her Waves; a young T. S. Eliot peering into his own rockpool in Massachusetts; even Nicolson’s father-in-law, a classical scholar who would hunt for amethysts along the shoreline, his mind on Heraclitus and the Hellenists.

And, of course, scientists populate the pages; not only their discoveries, but also their doubts and errors, their moments of quiet observation and their thrilling realizations.

It is all within the rockpools, where you can look beyond your own reflection and find the miraculous an inch beneath your nose. “The soul wants to be wet,” Heraclitus said in Ephesus twenty-five hundred years ago. This marvelous book demonstrates why it is so.

A New York Times bestselling author, Adam Nicolson has won many major awards including the Somerset Maugham Award, the W. H. Heinemann Award, and the Ondaatje Prize. His books include Why Homer Matters, The Seabird’s Cry, and The Sea Room. Mr. Nicolson lives in England with his wife and grown children.

Nathaniel Rich is the author of Losing Earth: A Recent History, which received awards from the Society of Environmental Journalists and the American Institute of Physicists and was a finalist for the PEN/E.O. Wilson Literary Science Writing Award; and the novels King Zeno, Odds Against Tomorrow, and The Mayor’s Tongue. He is a writer at large for The New York Times Magazine and a regular contributor to The Atlantic, Harper’s, and The New York Review of Books. Rich lives in New Orleans.