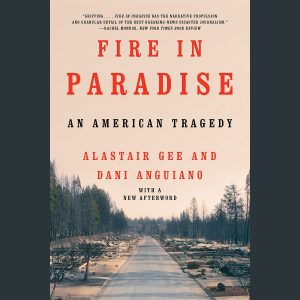 On November 8, 2018, the ferocious Camp Fire razed nearly every home in Paradise, California, and killed at least 85 people.

Journalists Alastair Gee and Dani Anguiano reported on Paradise from the day the fire began and conducted hundreds of in-depth interviews with residents, firefighters and police, and scientific experts. Fire in Paradise is their dramatic narrative of the disaster and an unforgettable story of an American town at the forefront of the climate emergency.

Dani Anguiano writes for the Guardian and was a reporter for the Chico Enterprise-Record. She lives in the San Francisco Bay area.

Alastair Gee is an award-winning editor and reporter at the Guardian who has also written for The New Yorker online, the New York Times, and the Economist.

Iris Natividad, Paradisian and Entrepreneurial Business person, has lived on the Ridge for 20 years. Her expertise in the vehicle registration field includes starting her own title and registration company assisting automotive dealerships nationwide with title and registration solutions. Iris was also an early member of an innovative software provider company that partnered with the California DMV to automate electronic vehicle registrations. Iris also helped champion the California DMV ‘Pink Ribbon’ license plate. She worked very closely with “Survivor Sisters”—founders of the initiative—in promoting the advance orders of more than 7,500 license plates for approval and release in 2018.

Two and half years since the fire that destroyed her home and took the life of the father, Skye Sedwick has moved to Albuquerque, New Mexico to be closer to her son and his family, including her first grandchild. Her daughter, who resides in South Carolina, is currently expecting her first child (Skye’s second grandchild) and is due in late October of 2021.  Skye is still awaiting her settlement from PG&E and plans to re-build in Magalia when she receives it.  She will spend her time in Albuquerque, New Mexico, Aiken, South Carolina and Magalia, California after the birth of her second grandchild.  She also enjoys creating art, spending time with friends, and attending flea markets and yard sales. 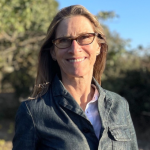