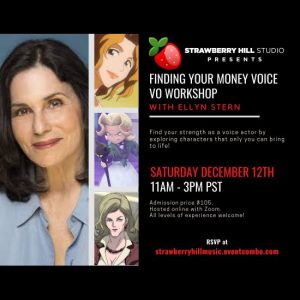 Find your strength as a voice actor: explore characters that only you can bring to life!

From Shakespeare to animated characters she applies the same depth.

One of her proudest achievements is her voice direction of the Navajo version of Star Wars Episode 4: A New Hope.

She’s voiced hundreds of characters including: Bleach, Ghost In The Shell, Innocence, Robotech, Gundam Unicorn, Phantasy Star Online ll and Lupin the 3rd, which she also co-directed Part 4 and Pokémon Generations which she also directed.

She’s been acting all her life, in film, television and stage. Most recently she’s been working on, LIFE’S A BITCH, which she wrote and stars in with Richard Epcar and Stephen Tobolowsky.

Tickets available for $105 online through Eventcombo

Link to join the workshop will be sent out to all registrants one week before the date.