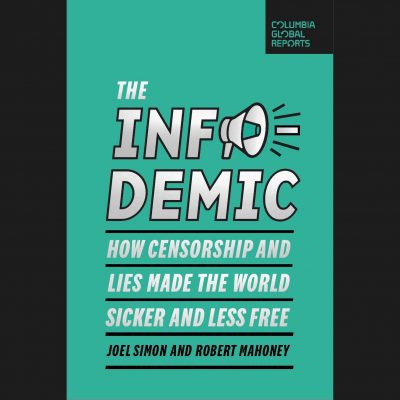 As COVID-19 spread around the world, so did government censorship.

The Infodemic: How Censorship and Lies Made the World Sicker and Less Free lays bare not just the use of old-fashioned censorship, but also how “censorship through noise” enhances the traditional means of state control (such as jailing critics and restricting the flow of information) by using a flood of misinformation to overwhelm the public with lies and half-truths.

Joel Simon and Robert Mahoney, who have been defending press freedom and journalists’ rights worldwide for many years as the directors of the Committee to Protect Journalists, chart the onslaught of COVID censorship—beginning in China, but spreading through Iran, Russia, India, Egypt, Brazil, and even the White House.

Increased surveillance in the name of public health, the collapse of public trust in institutions, and the demise of local news reporting all contributed to make it easier for governments to hijack the flow of information.

Using vivid characters and behind-the-scenes accounts, Simon and Mahoney show how, under the cover of a global pandemic, governments have undermined freedom and taken ever more authoritarian control—a new political order that may be one of the legacies of this disease.