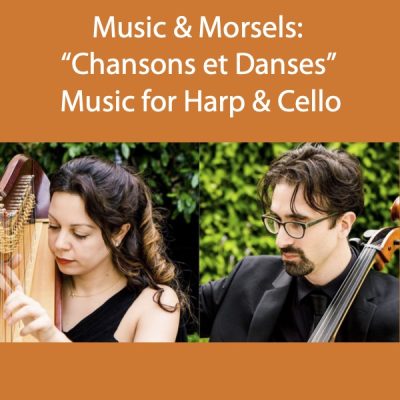 Join us as we welcome special guest artists – harpist Lily Press and cellist Simon Linn-Gerstein – for their Music & Morsels debut performance, which will include a gorgeous program of pieces including:

As an orchestral performer and recording artist, Press has played with the Santa Monica Symphony, Paul Madore Chorale, The Legend of Zelda – Symphony of Goddesses, The Midnight Hour, and Danbury Symphony. Additionally, Press has recorded soundtracks for video games and TV shows including Final Fantasy XV and Little Witch Academia.

Press was also a co-founder of the SillyBird Contemporary Chamber Music Festival, which was created in 2012 with the goal of performing contemporary chamber music in relaxed and non-traditional settings. Lily has collaborated with a number of composers including consulting with Curt Cacioppo on his piece The Red Dove of Libya, premiering Paul Brust’s The Remembered Present with the Longy Conservatory Orchestra, performing the Viennese premiere of Max Wanderman’s Deutche Grammatik, and the premiere of Jared Hettrick’s Tales of Taliessen with the Latitude New Music Ensemble.

Simon Linn-Gerstein, cello
Simon Linn-Gerstein has performed solo recitals for PBS Philadelphia, Rutgers-Camden Noontime Recital Series, as a guest performer for the Network for New Music at the Philadelphia Art Alliance, and as a soloist with the Salem Philharmonic and the Symphony by the Sea chamber series.

Simon is a co-founder of Strange Interlude with harpist Lily Press, an ensemble focused on intimate salon-style concerts with programs that are carefully curated to include seldom-performed works, pieces by contemporary composers (including newly-commissioned works) and transcriptions and arrangements for their unique instrumentation. He has performed with Strange Interlude at venues and concert series including ArtShare LA, Spectrum NYC, Northeastern University, Endicott College, the Isabella Stewart Gardner Museum, the Advent Library Chamber Series, the Nave Music Series, and the Candlelight Concert Series.

Simon has collaborated with members of the Philadelphia Orchestra, with Pulitzer Prize-winning composer Richard Wernick, and has recorded music for video games and TV shows, including Final Fantasy XV, Made in Abyss, and games from the Resident Evil and Monster Hunter series. He has performed as part of the Santa Monica Symphony, Hillyer Festival Orchestra, Cape Ann Symphony Orchestra, Symphony by the Sea, and MIT Concert Choir Orchestra. He received a Master of Music degree in cello performance from the Longy School of Music of Bard College, where he studied with Terry King. He also studied with Michal Schmidt at Haverford College, where he graduated magna cum laude with a B.A. in music.

All tickets are 1) are per device, not per person on Zoom, and 2) are non-refundable & non-exchangeable. 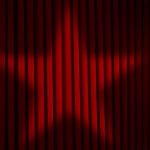 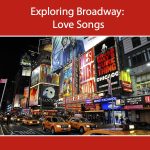