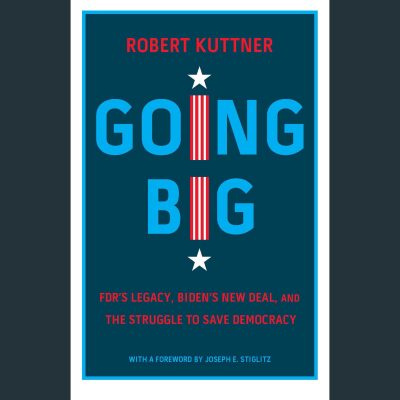 When President Joe Biden took office, the problems the new president faced were similar to the challenges faced by another U.S. president, Franklin Delano Roosevelt: decreasing opportunity for the average American, disproportionate power of the mega-wealthy, and a starkly divided political system.

To longtime political analyst Robert Kuttner, the similarities between 2022 and 1932 means President Biden has a similar opportunity to transform the country through major public investments.

In his latest book, Going Big: FDR’s Legacy, Biden’s New Deal, and the Struggle to Save Democracy, Kuttner draws on the striking similarities between the circumstances of FDR and Biden, including the major crossroads of American politics that marked both their terms.

With democratic backsliding, deep partisan divides and the ever-growing power of corporate interests, Kuttner says President Biden’s vision for the future will have critical implications for the future of the country—and, just like the New Deal, an army of opposition determined to maintain the status quo.

Join us, as Kuttner explains what is at stake for America in 2022 and the opportunity President Biden has at this unprecedented time in the nation’s history.