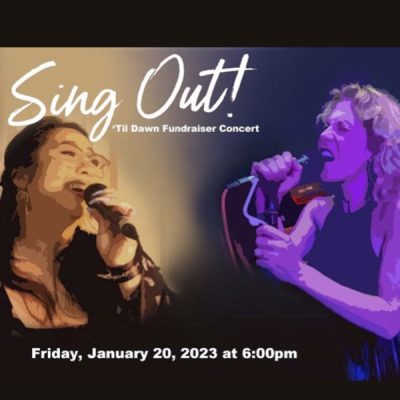 `Til Dawn is a tuition-based teen a cappella program.

All event proceeds support the `Til Dawn Scholarship Fund. `Til Dawn is a tuition-based teen a cappella program, but no student is ever turned away because of inability to pay. Help support our dedicated student artists and join us from anywhere, on January 20th!

Support equitable access to arts education for students throughout the Bay Area.

Celina Ventanilla was part of ‘Til Dawn all through high school, from 2010 to 2014.  After she graduated, Celina went on to Berklee College of Music for two years.  She is now working as a Student Success Specialist at Santa Rosa Junior College, where she is attending school part-time, pursuing a degree in dental hygiene.

Liz Hopkins has been singing all her life starting in choirs of all kinds, musical theater productions and then Til Dawn – under the mentorship of wonderful Austin Willacy who she still considers a dear friend and one of the coolest people she knows.

It was here during her high school years that she joined forces and started harmonizing with Ian, Eric and Brittany Holljes — and they are still harmonizing today in Delta Rae. As a lead Vocalist in Delta Rae, she has lived the touring musician life for over 10 years. Delta Rae has toured all over the US, and internationally, released 4 full length albums, played music festivals including Bonnaroo, Hardly Strictly Bluegrass, Austin City Limits, Lollapalooza and more- performed on National TV (Jay Leno, Conan O Brien, Seth Meyers), and had the honor of meeting Michelle Obama and singing at rally she held & lead. They have headlined their own tours for years and have shared the stage with Melissa Etheridge.

After 2 rounds with labels, Delta Rae set out in their own and became the most funded independent band until he history of Kickstarter. It has been a wild ride and 13 years into full time musician life, she hasn’t slowed down. She remains proud to be part of Delta Rae, who just released 2 more albums in 2022 – and will tour again in 2023.

When Liz is not on the road or in the studio with Delta Rae, she is singing in professional musical theater production and leading shows of her own around Raleigh NC. She has been learning to play piano for a few years, is starting with and bass, and is finally starting to write her own songs and put together plans for an album of her own. It’s only just begun…