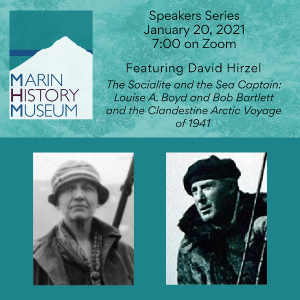 Zoom presentation on a clandestine Arctic voyage with clashing leaders

The Socialite and the Sea Captain: Louise A. Boyd and Bob Bartlett and the Clandestine Arctic Voyage of 1941

The ship’s captain was Bob Bartlett.  From the beginning these two strong, independent people did not get along.

They came from different worlds—hers from high society and philanthropy, his of the rough-and-tumble life of a seal-trading captain. The ship was his, the expedition was hers. Neither could stand the other, but both had committed to the voyage.

David Hirzel’s in-depth comparison of the two logs they both kept, each day side by side, casts a revealing light on the underlying conflict between them and the barely concealed contempt that continued throughout the voyage.

David Hirzel has written extensively on Arctic and Antarctic exploration. His books include a polar trilogy of the Irish seaman and explorer Tom Crean and Rough Weather All Day, an account of the doomed 1881 Arctic rescue mission of the USS Rodgers.