LOCAL>> The End of the Golden Gate (Kamiya, Reyes, Handler) 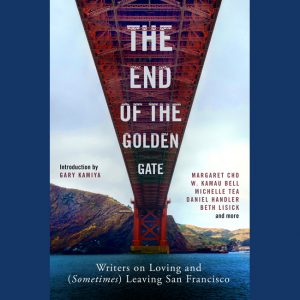 Over the last few decades, San Francisco has experienced radical changes with the influence of Silicon Valley, tech companies and more.

Countless articles, blogs and even movies have tried to capture the complex nature of what San Francisco has become, a place millions of people have loved to call home, and yet are compelled to consider leaving.

In the new book The End of the Golden Gate, 25 acclaimed writers take on the eternal question: “Should I stay or should I go?”

Subjects include:
– the tech-industry invasion and the evolution, gentrification, and radical cost of living that has transformed San Francisco’s most beloved neighborhoods;
– the lasting imprint of the 1960s counterculture movement; and
– the fight to preserve the art, music and other creative movements that make San Francisco forever the city of love.

A percentage of the book proceeds will be given to charities that help those in the bay experiencing homelessness.