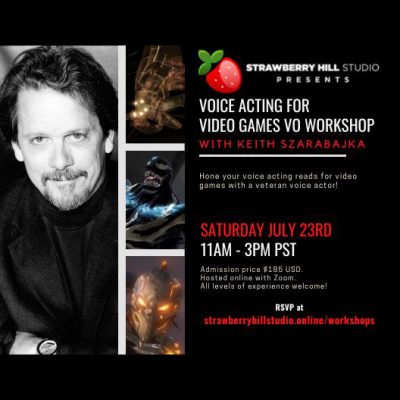 Hone your voice acting reads for video games with a veteran voice actor!

His voice is heard in numerous games, including DEAD SPACE and DEAD SPACE II ( which also entailed motion capture as Dr. Terence Kyne), MASS EFFECT I, II and III, LORD OF THE RINGS, FINAL FANTASY XIII, BIO SHOCK I and II, RAINBOW VI, SPLINTER CELL: DOUBLE AGENT and L.A. NOIRE: HARD-BOILED to name but a few.

Keith is proud to be in Ben Affleck’s 2013 Academy Award-winning Best Picture, ARGO, (which also happens to be the other name of Keith’s hometown, Argo-Summit, Illinois).

Prior to being manhandled by the late Heath Ledger’s Joker, he spent most of the WB’s “ANGEL” 2001-2002 season playing the 18th Century English vampire hunter, Capt. Daniel Holtz, who comes to the 21st century to seek justice (or is it revenge?) from Angel.

Before that, he played Mickey Kostmayer on CBS’ “The Equalizer”, starring Edward Woodward, from 1985 to 1989. Keith endured six hours of make-up each day in order to become seventy-year old janitor Harlan Williams, who grew younger in “Stephen King’s The Golden Years” on CBS (1991).

All information & updates will be sent to the email address that you have registered with, so please ensure you are checking it regularly.

Link to join the workshop will be sent out to all registrants one week before the date.

This session will be recorded and the resulting recording will be shared with all attendees privately as learning material.