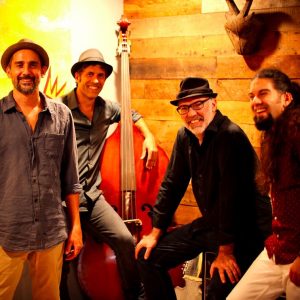 Their infectious sound and spirit has claimed fans worldwide.

Think Manu Chao’s energy and electrical live performance with the skill and rhythm of the Gipsy Kings.

Come move, groove, and lose yourself to the music of Latin America.

Winner of Ed McMahon’s “The Next Big Star,” Los Pinguos continue to blaze a path in music and to stardom. The four member band tour internationally around places such as India, Bali, The Montreux Jazz Festival in Switzerland, Italy, Netherlands, Puerto Rico, Mexico, Canada and throughout the U.S. Their music is featured on TV shows (The Shield, The L Word) and in movies (Imagining Argentina, The Ugly Truth, Teenage Mutant Ninja Turtles).

In 2005 Los Pinguos performed at the Sundance Film Festival and appeared in the award-winning documentary on street musicians, Playing for Change. Los Pinguos have performed with renowned artists such as Taj Mahal, Plácido Domingo, Paul Anka, The Skatalites, The Neville Brothers, Pablo Montero, Ozomatli, Cigala and Charly García.