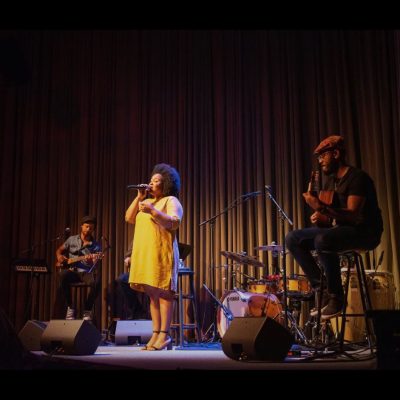 Lucibela grew up on São Vicente, whose port Mindelo (Cabo Verde) is famous for a number of reasons.

Mindelo is a musical paradise thanks to the Brazilian, Cuban, British and Portuguese sailors who sowed the seeds of morna and coladera there. Those Creole fusion genres were introduced to the world by one of their most illustrious performers: Cesaria Evora, a native of Mindelo.

Beneath Lucibela’s sweet, smiling exterior is a woman who has also experienced life’s hardships. When she was in the last year of high school, her mother died and left the family destitute. To follow the dreams of her lost mother, Lucibela had to find a job that paid… and the teenager had a talent: singing.

She adored bossa nova, of course, but also listened to Brazilian pop on the radio. So, she formed a group with friends who, like her, preferred jazz and rock to traditional genres.

Lucibela shrewdly realized that she could earn a living by singing in the hotels and bars of Mindelo, frequented by tourists who wanted to hear local songs. So, she began to cover Cesaria Evora’s repertoire, beginning with Nutridinha, a joyous, beautifully crafted song about bad girls.

Lucibela joined the Mindel Som band and left for the island of Sal, where she re-energized the role of hotel singer, especially at the Morabeza. Then she was offered a contract to sing on the sand-dune island of Boa Vista. She remembers working hard and learning a lot about vocal technique, the repertoire and the secrets of winning over audiences.

In 2012, she went to live in her country’s capital, Praia, where she encountered Kaku Alves, Cesaria Evora’s guitarist for nearly 15 years. Lucibela sang at the Quintal da Musica and took part in the television talent contests Talento Estrela and Estrela Pop, reaching the final.

Keen to spend more time with her family and daughter, she recently moved to Lisbon.

Lucibela explains that to go on learning and not lose her touch, and because singing is a sharing, candid, face-to-face experience, she still performs in the squares and streets. When she mentions that, a blissful smile gently lights up her face.