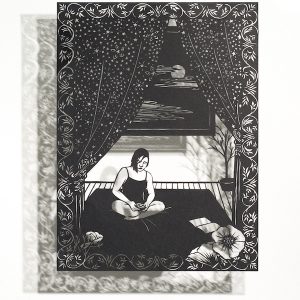 [Pictured: Bianca Levan, “Beauty Lies Between My Palm and Death”]

Margot R Graham was raised in the Bay Area of California, growing up in a suburban community near the Lawrence Livermore National Laboratory. Her father, Jack Rosengren, was a renowned nuclear physicist, which influenced her interests in mathematics and abstraction. She went on to receive a BA in Art Practice at UC Berkeley where she studied with established Bay Area figurative painter Joan Brown and colorist Donald Kaufman…to name a few. In 1979 she moved to New York City to reinvent her art practice and began showing in the East Village as well as the Queens Museum for “up & coming” artists.

After almost a decade, Margot returned to San Francisco to start a family and build a home, which revitalized her interest in architecture and design. The process of designing the home alongside contemporary architects became an artistic outlet and redefined her relationship with painting. She worked for several years at the ICB Building in Sausalito, CA, and now works out of her studio space in San Francisco. She is presently traveling half the year abroad roaming museums and other cultures.

Finished art is often thought of as separate from its own creation. But this is deceiving.  The creative process, from spark to maturation to completion, is as much a life journey as that of the artist: encompassing birth, growth, chance, and death – all chained to the relentless flow of time.

Beauty Lies Between My Palm and Death begins my own exploration of this multifaceted microcosm by considering elements of my creative process: introspection, influence, inspiration, interpolation, and time. Far from aiming to reduce the creative process to mere discrete steps, I seek to acknowledge that the process is just as beautiful as the finished piece itself – or may even be the heart of where the beauty of the piece lies. Through this lens, it became important for me to consider my relationship to each of these aspects separately, as well as how they resolve into a whole – what can they tell me about my conflicted relationship with beauty and time? 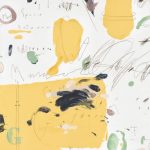