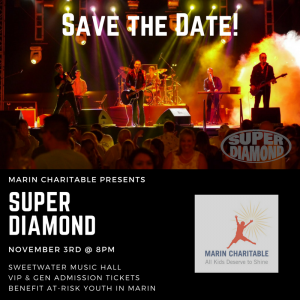 A transcendant tribute to Neil Diamond, in a benefit concert for Marin Charitable

Many would say that San Francisco’s Super Diamond has transcended the label of “tribute band” by passionately immersing themselves in Neil Diamond‘s huge repertoire and delivering a high-octane show of unforgettable classics such as Cracklin’ Rosie, Sweet Caroline, Forever in Blue Jeans and many others.

Super Diamond front man The Surreal Neil, Randy Cordeiro, astonishes audiences with his live interpretation of the “real Neil.”  Randy created the charismatic character when he discovered he had the uncanny ability to capture not only Neil Diamond’s voice, but also his mannerisms and performance style.

With a dedication to performing a dazzling, rockin’ show and a reputation as one of the best live bands in the country, Super Diamond continuously draws full-capacity crowds and has a loyal, dedicated and ever-expanding fan base that bridges generations.