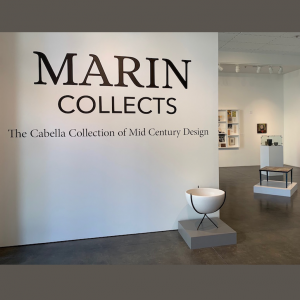 From the private collection of Steve Cabella, works by Edith Heath and Ray Eames

This exhibit will feature the mid-century modern collection of Steve Cabella, including the artwork of artisan Edith Heath and designer Ray Eames.

Cabella is a Marin native, a design historian, and owner of the Modern i; a shop in San Anselmo specializing in midcentury modern design furnishings. He has been collecting art since 1974 and developed an affinity for the work of Charles and Ray Eames in 1978 after purchasing an Eames dining chair for five dollars at a garage sale. According to Cabella, the work of these two designers represent the best of California design—furniture that is simple and honest; nothing more, nothing less.

Furniture, art, and craft pieces from Cabella’s collection were featured in a 1981 exhibit at College of Marin—an exhibit publicized as one of America’s first midcentury modern shows. His collection has also been in shows close to home and across the globe, including SFO’s International Terminal, Los Angeles, England, and Japan.

In addition to the work of Eames and Heath, a majority of the pieces selected for this show were designed by female artists such as Bruton sisters Margaret, Helen, and Esther; Margo Elbert; and Margaret de Patta. Works by Luther Conrad, Gene Tepper, and Peter Macchiarini are also on display.

Marin Collects celebrates the passion that moves people to acquire art that evokes and stirs something within them. Marin Collects brings unique pieces together in support of sharing an appreciation of the arts in our community.