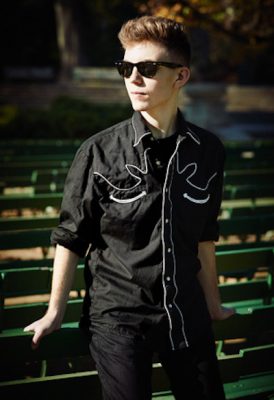 Matt Jaffe & The Distractions is a rock ‘n’ roll band based out of San Francisco, CA. After Jerry Harrison, keyboardist of Talking Heads fame, discovered now-19-year-old Jaffe performing solo at a local open mic, the two worked together to produce his first set of studio recordings. Following this first taste of the music industry, Jaffe put together his own band of Alex Coltharp on drums, Sammie Fischer on bass and Alex Newell on guitar. Inspired by the pop, punk and rockabilly mixtures of groups such as The Clash, X and Elvis Costello, the young group recorded their first album of original material with producer Matthew King Kaufman (Jonathan Richman, Greg Kihn) and A&R vet Michael Caplan, slated for release in 2015. After a brief educational stint in Connecticut, Jaffe is back in San Francisco with the group, ready to take the world by storm with their unique brand of California rock. Keep a weather eye for upcoming releases and tour dates!

Caroline de Lone, daughter of musician and RDSHP co-founder Austin de Lone, is a singer and songwriter who has appeared on stage with acts as varied as Sugar Pie DeSanto, Buddy Miller, Elvis Costello, and the Christmas Jug Band. She has performed at Sweetwater Music Hall, Fenix, The Sleeping Lady, Bimbo’s 365 Club, The Great American Music Hall, and at the Porretta Soul Festival in Porretta, Italy. Caroline is about to release her first cd of original songs, titled Fingerprints.