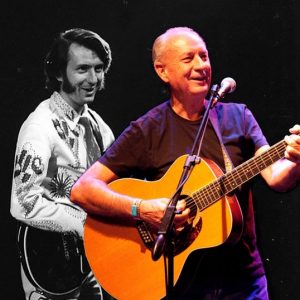 Michael Nesmith will be performing in a duo format with him on acoustic guitar and vocals and pedal steel guitarist Pete Finney.

They’ll be playing his classic 1972 album And the Hits Just Keep On Comin’ featuring “Different Drum,” “Keep On,” as well as other Michael Nesmith and Monkees classics.

These performances will mark the first time Nez has toured as a duo since 1975 (when he worked with the legendary Red Rhodes).  These six shows will commemorate Nez’s successful return to the concert stage and latest live album, Live At The Troubadour (recorded with his other touring ensemble, The First National Band Redux).

Michael’s sold-out run of shows in California drew rave reviews and were followed in September by a tour of the South, Northeast and Midwest. His recent performances have focused on his legendary 1970s albums recorded for RCA, but this is the first time he will perform any of his albums in its entirety.