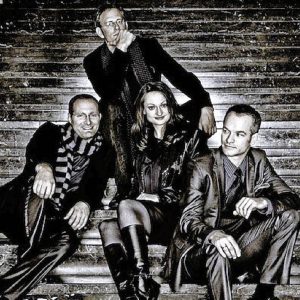 Widely regarded as the world’s premier piano quartet, the Fauré Quartett’s members met in 1995 while studying in Karlsruhe, Germany for the 150th anniversary of Gabriel Fauré’s birth.

These German musicians loved playing Fauré’s quartet so much they took the name for their group.

In 2006, they were signed to a recording contract by Deutsche Grammophon, raising them to the pinnacle of the classic music world. They have made highly regarded, benchmark recordings of works by Mozart, Brahms, and Mendelssohn.

In 2010, the Fauré received the ECHO Classic award for their album “Classic Beyond Borders.” Their 2008 recording of Brahms’ piano quartets was named Chamber Music Recording of the Year.

This program blends Quartettsatz in A Major, a one-movement work by a 16-year-old Mahler, perhaps his only chamber work, with two of the greatest piano quartets every written.

Brahms prepared for two years before moving to Vienna, then the musical capital of Europe, and played his Piano Quartet in G-minor to wow the sophisticated Viennese – a newer, wider concert audience for his debut performance.

Fauré had become interested in developing an innovative style of “French” music after the Franco-Prussian War, and his Piano Quartet in C-minor was a harbinger of that change. Both are monumental works.

Tickets may be purchased in advance online, or at the door the day of the concert