Moon Over the Helan Mountain 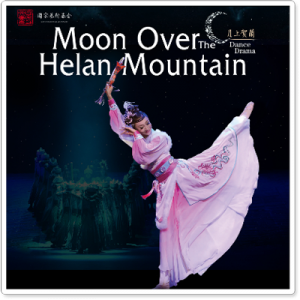 Hailing from the autonomous region of Ningxia, the Yinchuan Art Theater Company has performed Moon Over the Helan Mountain in major Chinese cities such as Beijing, Shanghai, Shenzhen, Hangzhou.

Reaching back into the history of The Silk Road, through vibrant costumes, original music, and stunning dance choreography, Moon Over the Helan Mountain shares the story of the young merchant Narsu as he ventures through the desert, across the Yellow River, and into a foreign land—falling in love with the local girl, Hai Zhen.

Through the direction of the Ministry of Culture and Tourism, the dance drama has toured in Egypt, Qatar, Algeria, and Indonesia, gaining international acclaim. Now, we welcome the global phenomena to the United States for limited engagements.