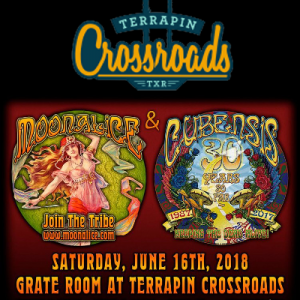 Moonalice is a psychedelic, roots-rock band of seasoned musicians mixing a variety of genres with extended musical improvisations that evoke a sense of adventure and exploration. Everyone is a part of the experience and the music inspires dancing and other acts of self expression.

Moonalice plays mostly original material mixed with several covers, and during their extended freeform jams the band moves as one, drawing from many musical genres honed from years of experience playing with various major acts.

Since 1987, Los Angeles-based band Cubensis has carried the torch in celebration of one of America’s most beloved touring bands, the Grateful Dead. Cubensis sets out to re-create the Grateful Dead experience by emulating the spirit of Jerry Garcia, Bob Weir, Phil Lesh, and the rest of the legendary San Francisco jam band.

The band doesn’t reproduce the Grateful Dead’s songs note for note—though it would be hard for most listeners to tell. The Dead’s music is highly improvisational, with rock, country and jazz influences. Cubensis members say there’s room for interpretation while staying true to the original. “It’s all about tapping into the same inspirational flow,” says Cubensis lead guitarist Craig Marshall.